As I type these words, the Solstice is rapidly approaching. I am preparing my working space to host the honoring of Ekhi Amandre, grandmother sun, as she is once again re-crowned as the Queen of Heaven. With the suns inevitable return, and the painfully slow war it will wage against the fog and snow on the mountains, my attention will likewise begin to turn from the domestic cult, the Beloved dead, as I impatiently prepare for the coming spring; effectively ending a season of worship and devotions that began with Gau Beltza, on October 31st. The eye, however briefly, allowed to waiver from the realms below to think on the necessary preparations that will be underway as soon as the snow melts.

The domestic cult, however, still demands my attention.

Domestic Cult, here describing the accumulation of ones ancestors, I have come to think of as a spiritual tribe. In days gone by, ancestors were believed to be closely tied to the etxea, or family home. However, being the child of diaspora in a low income family, I have come to think of its ties as less tangible. Families adur, energy, tied together by the quality of their surname, as described by the Basque folklorist and Historian Jose Miguel Barandiaran, is an idea that I find rests more comfortably in my cosmology- the Tribe is everything. Ties to the Dead woven and cut by a host of psychopomps and august nurses. Cultivated with time spent amongst the elders, the wisest, the wiley. Coming to learn the names, favored drinks, meals, and music of the Dead who gather to rest and warm themselves by the candlelight offered up. I prescribe, in a loose and fluid way most familiar to the witch, to the idea proposed that the dead lose sway over the realm of the living when they are forgotten by their descendants. That those spirits of great adur, who live virtuous and fruitful lives, will live on in their descendants memory with pride. This is not to say that the ancestors of long ago lose importance, but rather become less concerned with the everyday managing of their house. Often I will call upon these ancestors, Deep Ancestors, in times of spiritual need and crisis. These are the Aquitanians and sheep herders whose name my eldest relatives do not know, but who still has left a seed of themselves in all of us.

Veneration of our ancestors is one of the oldest and longest persisting forms of human spirituality. Found in every corner of the globe, humans have always found a spiritual quality to those who came before us. It would make sense, then, that humanities proper beginnings are tied to when we begin to find grave goods and ritual burials- in the time when pre-history and “civilization” begin to overlap. Still, forms of ancestor veneration are deeply cultural and can be found almost anywhere, especially amongst indigenous pre-forced conversion practices. Each of these cultures holding specific traditions, festivals, and methodology of veneration.

Ancestors must not always be those related to us by blood, either. The concept of spiritual ancestors, popularized in the modern day through the veneration of saints in certain sects of christianity, refers to any ancestors we gain through initiation or baptism. For the witch, this may be the often-referred “Mighty Dead”, in Christianity it may be Saints, mythic cultural ancestors such as the Gaulish Ogmios, or even gods. These ancestors, rather, are tied to us by shared belief and intellectual pursuits in life. Often, the tradition that ties us to these spirits have specific ritual observances to properly honor and interact with them- as obviously these are spirits we often do not have accurate first hand accounts of. While they may not take such a central role of the cult of the Dead, they should be honored on their proper days and given a portion of offerings given.

Each year, for the last few years, I like to take up a project on the day of the Solstice. Make something to be born with the new sun. Last year, when we were blessed by the strange astrological event of the Midwinter Solstice and the Great Conjunction of Jupiter and Saturn coinciding, I crafted an oil. Made from solar, saturnian, and jupiterian resins- it was as if the three magi circled the newborn Ekhi Amandre, showering Her with gifts. To this day I still have buckets of the oil tucked away in apothecary jars, golden in the light of the Brighter Luminary. You see, gold and such related materia are sacred to the Sun. They exalt and represent her presence. So if last year was gold, it was clear to me this year needed to be softened- this was to be a year of honey.

I’ve decided this year to take my first leaps into fermenting my own mead, the shining drink of the dewoi. Also known as honey wine, mead is a drink that has come to represent sovreignty and holiness. Much beloved for its versatility in its flavor, by adding a few sprigs of herb or floral you can get a vast array of tastes ranging from the sweet to the beer-like. From a magical perspective, this is an incredibly helpful and potentially workable quality of the drink, its receptivity to materia. The drink may be altered in some ways to be favored by various spirits, for example. A sprig of cypress for the realms below, a leaf of bay for the realms above. For my purposes, this will be a drink of the dead and those who guard them. With that in mind, I will be turning to plant materia known to be favored by the realms below, its guides and guardsmen alike.

A Mead for the Dead Recipe
– 3 pounds of locally sourced honey, from bees who have fed on the flowers of the land.
– 2 grams champagne yeast
– 1/2 gallon of filtered water
Once properly prepared, the following materia will be added
– yarrow, for immortality
– cinnamon, to warm the dead
– clove, to please the dead

Once prepared and bottled, the drink must be left in a cool place for six weeks, meaning it will be ready for use just as February begins to wax. In time for the blessings to be given to the house, and its inhabitants, to the animals and the hearth. Offerings to keep the Dead’s cups full and the spirits of Dubnos satisfied as the final snows overtake the land before we once again have spring.

According to Western Astrology, I was born with my natal Mars and Mercury in conjunction with the fixed star Alkaid, the Great Bear. This is an omen of disruption, an empire toppling kind of ferocity. A thing I carry with me, strangely, like a torch, wrapped tightly in bear furs that have kept me warm through the long winters of my life. To imagine myself wet and unwilling as I am midwifed from the dark space between the great mawing stars of Ursa Major. My father knew nothing of astrology, but he was a man of the mountains and he knew of the stars. Often in the summer and in the crispness of fall we would be outside in a great field together, and he would point up and show me Her face with all the glee in the world. I wonder if intuitively he knew he was introducing me to a power that had claimed my soul the very moment I took a gulp of the clean alpine air he loved so dearly. 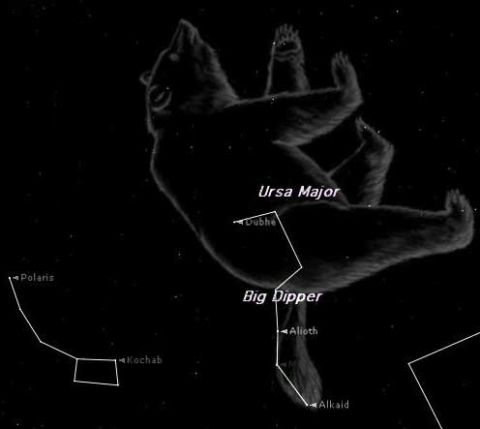 “According to Ptolemy, Ursa Major is like Mars. It is said to give a quiet, prudent, suspicious, mistrustful, self-controlled, patient nature, but an uneasy spirit and great anger and revengefulness when roused. “

Bears and Alkaid also frequent North American folklore and native religion. From stories of celestial hunters tracking and killing Ursa Major, whose blood stains the leaves of autumn, to the mythos of Wejuk the uncatchable bear. They are also seen by the tribes native to the regions now known as Vermont to have been the souls of chiefs and shamans, powerful leaders returning from the depths of the caves that bears call home.

Furthering the spiritual adeptness of bears, as according to cultures across the world, they dwell in the meeting place between the godly and the profane. In caves, where dubnos reaches up and yawns open into the realms of man, bears make their winter dens. These places, which are used across the globe as holy sites, chapels, places of initiation and rebirth, hold the divine Telluric force of the Earth. Often depicted in mythos and folklore as the homes of witches, lamiak (fae), powerful female Goddesses and the feminine pseudo-divine. Caves were the first homes of man and within them we have found the first embering sparks of divinity and creativity, dripping from earthen walls in brilliant red ochre. Stories told out in spirals, of hunters with their prey and the animalistic forms of shamans, designating the cave as place of the Dead and of the Reborn.

In my personal practice, I have come to understand the Cave as the entry to the realm of my gods and ancestors. A door the heavens pass through, the great luminaries and stars, when it is time for them each to get their respected repose. A door still that my goddess, Mari, guards in all of Her fire and glory. Greeting her daughters when they come to bed amongst the golds and sheepskin of dubnos, turning away rude men who would seek shelter from storm or army. I only approach cave’s when I come upon them with the utmost respect, and in turn with the ancient customs, throw a coin in before turning away to walk back down the mountain or trail. Unless otherwise greeted, it is important not to disturb any potential spirits that come to rest here, or worse yet offend the home of the mother.

It would make a certain degree of sense, then, that Mari most often comes to me in the face of a bear. Her innate liminality made manifest, Her role as Queen-Mother of her people held firm. A stern but loving mother, who like the fixed star of Alkaid is capable of incredible destruction and storm bringing wrath.

I would not truly understand my affinity for bears as a totemic force, however, until my dear friend read for me from her runas. Divining forth the imagery of chthonic power, the shifting and ursine nature of my spiritual patroness. To have such a personal image made manifest in anothers divining is a holy moment, when the metaphysical reaches down and shows itself in the comforts of another. It was a powerful reading that left us both fevered, and one I hold tightly now as I journey deeper into the spiritual cave and realms below- hoping, like a bear, in spring I will once again return to the land of the living, reborn and hungry.